The core missionary task (CMT) is the language the International Mission Board uses to describe the center of their missions strategy.

The CMT consists of six phases: 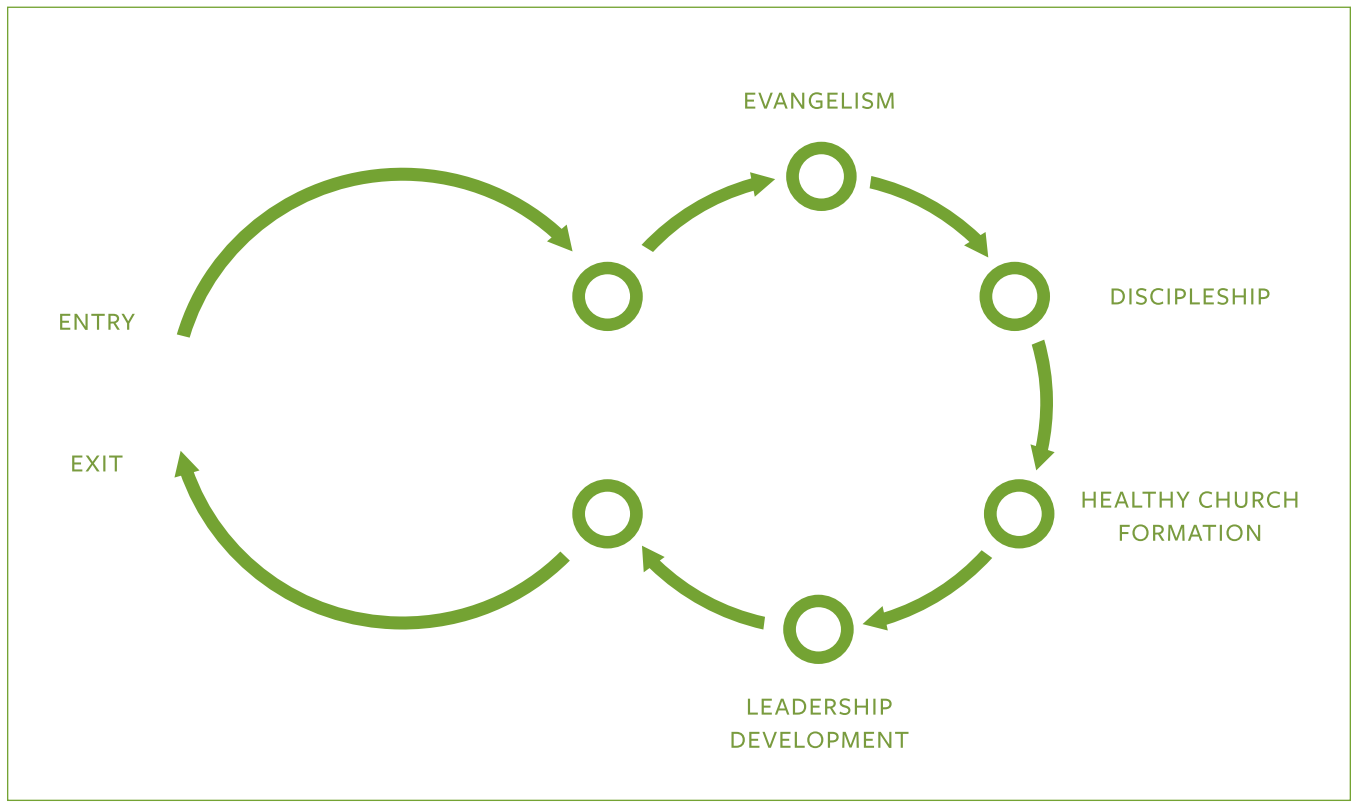 These aspects of the task are not necessarily linear, though they do follow a rough progression. Furthermore, the task is meant to be a spiral, in that once you reach the end, you begin partnering with the churches and leaders you've developed to further engage in the missionary task.

Usage by the IMB

Intended for use in cross-cultural missions in international fields, the CMT is a framework and not a specific missions method. As a framework, it's broad enough to provide structure for all of the IMB's field strategies regardless of region, culture, or worldview.

Different IMB teams across a range of cultural and religious affinities globally employ different missions methods that are both biblically faithful and culturally relevant while congruent with the CMT.

Though designed for use internationally in cross-cultural settings, the CMT is brush enough to be a helpful framework for North American missions as well.

According to the United Nations, there are an estimated 272 million global migrants that have left their country of origin and moved to another country.

The United States is far and away the largest recipient of immigrants globally, claiming approximately 50 milliomn of the 272 million migrants.

India is the largest donor country, providing the largest portion of global migrants to other countries.
, which means North American missions must consider cross-cultural strategies in order to approach Gospel SaturationGospel Saturation
Gospel Saturation is the idea that every man, woman, and child in a region would have access to the gospel in a way they understand.

In Scripture, we see this goal described by Luke in the summary statements he provides concerning the [[Mission of the Church]]. In each instance, Luke now how the Word of the Lord increased, spread, multiplied, and even prevailed.[[list references here::rsn]] Like records that all within a region had heard the Word of the Lord.[[cite references::rsn]]
.

A Whole Bible Theology of Mission

A whole Bible theology of mission is integral to a healthy [[Biblical Theology of Mission]], and includes both a full understanding of th...

This note is on my list of [[Important Questions to Answer]]. Outline [[A Whole Bible Theology of Mission]] [[Mission and Missions]...

"Christianize and Civilize" was a common call of the [[Modern Missions Movement]] during the [[Era of Noncontextualization]]. In essence,...

Contextualization on the Mission Field

This note is on my list of [[Important Questions to Answer]]. Move Past the Rhetoric of Multiplication North American missionaries must...

This note is on my list of [[Important Questions to Answer]]. What is meant by "reaching a city"? The term reach has a broad definition i...

After a long period of decentralization away from city centers and into suburban and exurban settings in the United States, several key f...

The following questions are a good representation of the major areas of my study. All fall within theolgy and applied theology categories...

In [[Invitation to World Missions (Tennent, 2010)]], Tennent notes that until the 16th century, the term mission was used to speak exclus...

Summary: The Bible tells the story of the Triune God who has a cosmic mission for his ultimate glory that is accomplished first throug...

The Bible tells of how God has selected for himself a people through which he will accomplish special purposes within his mission of rede...

Mission of the Church

As God's New Covenant community, the church is responsible for the [[Mission of God's People]] in the time between the times, as we provi...

New Immigration is a Missionary Occasion

The city is making a comeback. After a long period of decentralization that began in the 1920s with the birth of the automobile and the d...

This is a topic note that compiles all the notes that relate to urban missions. Look below to see all of the notes linked to this topic. ...

Worldview Wordlivew consists of the "fundamental assumptions about the nature of reality."[[Hiebert, Anthropological Reflections on Mi...

It is my objective in this book not only to demonstrate (as many others have done) that Christian mission is fully grounded in the Scr...

"There should be no theology that does not relate to the mission of the church — either by being generated out of the church's mission...

The following books are a selection of works that I regularly recommend to pastors and ministry leaders in local churches to suggest a...

Books Priority of Missions Ashford, Riley. Gospel of Our King. Baker Academic, 2019. DeYoung, Kevin, and Greg Gilbert. What Is the ...

Pathways » IMB is a cooperative equipping cohort facilitated by churches in the Union Baptist Association in partnership with the Inter...

If you have additional questions about equipping for international missions through Pathways » IMB, look below for answers to some of our...

You have permission to cite anything you find here, but I ask that you not plagiarize and provide attribution. This site may earn from qualifying purchases as an Amazon Associate.