The Bible tells the story of the Triune God who has a cosmic mission for his ultimate glory that is accomplished first through the creation of a place and (more importantly) a people and subsequently through the redemption and recreation of that people and place. The mission dei is Trinitarian in essence, cosmic in scope, and developed through God's covenants, which all find their telos in the person and work of Christ.

This summary is an adaptation from the summary provided by Ott, Strauss, and Tennent in Encountering Theology of Mission (Ott, 2010).

The Mission of God is Trinitarian in Essence

As noted by Tennent in Invitation to World Mission (Tennent, 2010), the term mission was used exclusively by the church to refer to the action of the Trinity until the sixteenth century. At that time, Jesuits bega to use the word to refer to the propagation of the gospel. In recent years, a number of scholars are working to revive a robust Trinitarian missiology. Perhaps the headwaters of this movement within evangelicalism was Lesslie Newbigin's The Open Secret, where he proposed proper mission theology could only be reclaimed with a return to a Trinitarian understanding of mission.The Open Secret (Newbigin, ??), ?? In the last decade, Timothy Tennent provided a Theology of Mission that attempts to recast mission in a robust Trinitarianism. Tennet outlines his entire theology of mission in a Trinitarian framework: the Father is the sender, the incarnate Son is the model embodiment of mission in the world, and the Holy Spirit is the empowering presence of all mission.Inivtation to World Missions (Tennent, 2010), 74.

While this is a welcome development, one must be careful not to divide the work of God in an unhelpful way. Since God is Trinity, it naturally follows that all three persons are equally involved in each aspect and in like purpose in the mission of God.

The Mission of God is Cosmic in Scope

The mission of God is cosmic in its scope, a point that is demonstrated by two significance themes that run throughout the canon. The first is the theme of creation and recreation. The second is the nations theme that deals with all the peoples of the world.

The Mission of God Develops through the Covenants

As God acts to redeem, the covenants disclose God’s eternal plan and reveal many truths, such as: who God is, the purpose of our creation, and how we are to live in relationship with God and each other. God's Kingdom through God's Covenant (Gentry & Wellum, 2015), 252.

Gentry and Wellum assert in God's Kingdom through God's Covenant (Gentry, 2015) that the plurality of covenants (e.g., Gal. 4:24; Eph. 2:12; Heb. 8:7–13) found throughout the covenant between God and his people "are part of the progressive revelation of the one plan of God."Peter Gentry and Stephen Wellum, God’s Kingdom through God's Covenants: A Concise Biblical Theology (Wheaton: Crossway, 2015), 25. God's promise plan throughout Scripture, and his mission to accomplish this plan, unfolds as God makes covenants with his people. As the covenants progress, the plan and it's parameters clarify with each subsequent covenan. In Genesis 3, in the same moments that the curse of sin delivered, God promises a plan, through the seed of the woman, to crush the seed of the serpent. By Gensis 12, this plan is established through the family line of Abraham. Further clarification comes through the Israelite covenant (Exod. 19-24), and by the Davidic Covenant, God singles out the kingly line of David (2 Samuel 7) to produce the Messianic king that would save his people and rule on David's throne forever. The plan centers on the person and work of incarnate Son, Jesus the Christ, whose work established the new covenant. They mystery is finally and fully revealed through the church (Eph. 3:10). 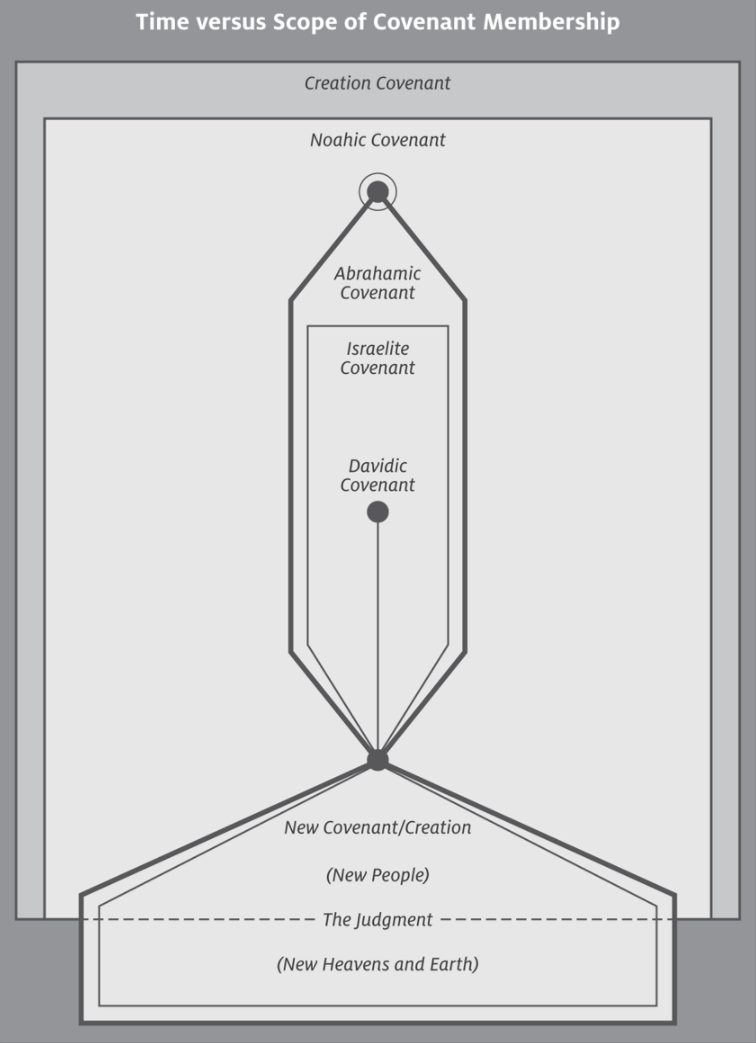 The Mission of God finds its telos in Christ

Since all of the biblical covenants are part of the one plan of God, no covenant is unrelated to what preceded it, and no covenant can be understood apart from its fulfillment in Christ, it is right to say that all of the biblical covenants reach their telos in Christ and the new covenant. God's Kingdom through God's Covenant (Gentry & Wellum, 2015), 253.

The biblical metanarrative progressively unfolds in such a way as to resolve itself completely in the person and work of Christ. In that way, all of the covenants, and all of God's mission, aims at what is accomplished in the Christ event of Scriptures and the creation of the new covenant community. Christ's work inaugurates all that the former covenants promised in the kingdom of God, though it's ulitmate consummation is yet to occur.

What the previous covenants revealed, anticipated, and predicted through various patterns, types, and instruction, is now here, albeit in inaugurated form. That is why our Lord is presented as the new covenant head, who in his person and work is greater than Adam by undoing what Adam did and thus winning for us the new creation; the true seed and offspring of Abraham, who brings blessings to the nations by his cross work; the true Israel, fulfilling all that she failed to be; and David’s greater son, who rules the nations and the entire creation as King of kings and Lord of lords. God's Kingdom through God's Covenant (Gentry & Wellum, 2015), 254.

It is essential to understand the person and work of Christ. Christ was no mere example or movement leader. Jesus is the incarnate Son of God who's perfect life made him the perfect sacrifice and the necessary atonement for sin. He is the first fruit of the coming resurrection, he currently sits at the right hand of the father interceding for his church. He will one day come again to judge the living and the dead, consummating his kingdom.Language from the Nicene Creed.

A Whole Bible Theology of Mission

A whole Bible theology of mission is integral to a healthy [[Biblical Theology of Mission]], and includes both a full understanding of th...

This note is on my list of [[Important Questions to Answer]]. Outline [[A Whole Bible Theology of Mission]] [[Mission and Missions]...

[[ca. 1690 map of Jerusalem by Daniel Stoopendaal::rmn]] The map of content serves as a natural starting place for someone wanting to ...

The Bible tells of how God has selected for himself a people through which he will accomplish special purposes within his mission of rede...

Mission of the Church

As God's New Covenant community, the church is responsible for the [[Mission of God's People]] in the time between the times, as we provi...

"Christianize and Civilize" was a common call of the [[Modern Missions Movement]] during the [[Era of Noncontextualization]]. In essence,...

Contextualization on the Mission Field

The core missionary task (CMT) is the language the International Mission Board uses to describe the center of their missions strategy. T...

This note is on my list of [[Important Questions to Answer]]. Move Past the Rhetoric of Multiplication North American missionaries mus...

This note is on my list of [[Important Questions to Answer]]. What is meant by "reaching a city"? The term reach has a broad definition i...

After a long period of decentralization away from city centers and into suburban and exurban settings in the United States, several key f...

The following questions are a good representation of the major areas of my study. All fall within theolgy and applied theology categories...

This note is on my list of [[Important Questions to Answer]]. North American cities are currently experiencing one of the largest inte...

New Immigration is a Missionary Occasion

The city is making a comeback. After a long period of decentralization that began in the 1920s with the birth of the automobile and the d...

This is a topic note that compiles all the notes that relate to urban missions. Look below to see all of the notes linked to this topic. ...

It is my objective in this book not only to demonstrate (as many others have done) that Christian mission is fully grounded in the Scr...

"There should be no theology that does not relate to the mission of the church — either by being generated out of the church's mission...

Worldview Wordlivew consists of the "fundamental assumptions about the nature of reality."[[Hiebert, Anthropological Reflections on Mi...

Pathways » IMB is a cooperative equipping cohort facilitated by churches in the Union Baptist Association in partnership with the Inter...

If you have additional questions about equipping for international missions through Pathways » IMB, look below for answers to some of our...

Books Priority of Missions Ashford, Riley. Gospel of Our King. Baker Academic, 2019. DeYoung, Kevin, and Greg Gilbert. What Is the ...

Introduction The goal of Pathways is the growth of the gospel. In the book of Acts, Luke makes it clear that this was his primary metri...

You have permission to cite anything you find here, but I ask that you not plagiarize and provide attribution. This site may earn from qualifying purchases as an Amazon Associate.